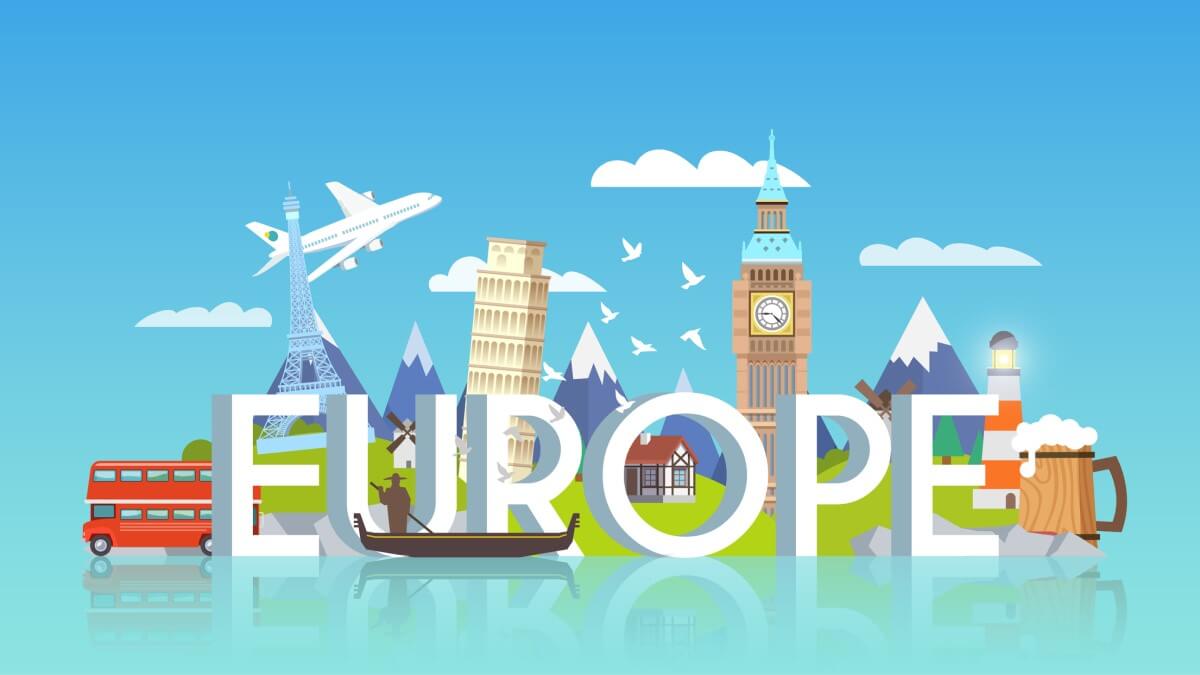 With the COVID-19 situation improving and travel rules loosening each day, it’s the perfect time to start planning a trip to Europe.

Europe has been one of the most popular destinations for travelers from all over the world for years now. The European continent is mainly characterized by its soft climate during spring and long and warm summer days, and is the perfect place to visit.

Although every European country and city has its own beauty and characteristics, below you may find some of the most popular destinations among travelers.

Known for its rich cuisine, fashion and culture, France is undoubtedly one of the most popular destinations. Now that the country has eased the majority of restrictions related to the COVID-19 disease, you can visit Paris with a fully planned itinerary.

Paris is among the European cities with different monuments and all kinds of architectural styles, the most famous of which are the Arc de Triomphe and the Eiffel Tower.

Its museums, especially the Louvre, make Paris the perfect city for art lovers. In addition, spring and summer are the perfect time to explore the different cafés and terraces in Paris and try some of the most famous pastries.

You should also visit the gardens located throughout the Paris region. While you’re in Paris, don’t forget to leave some free time to visit the Jardin du Luxembourg, famous for its beautiful fountains, sculptures, and tree-lined promenade.

>> Now it’s easier than ever to travel to France despite COVID-19: Vaccination, testing and more entry rules explained

The capital of Iceland, which is at the same time the largest city in the country, is distinguished by the wonderful scenery and activities it has to offer.

The Perlan Museum, which looks like a pearl on top of Reykjavik, is definitely one of the most attractive places. Surrounded by woodland on Öskjuhlíð Hill, with 360-degree views across the metropolitan area, the museum is suitable for all year round.

Additionally, the Hallgrímskirkja church that guards Reykjavik is a must-visit as well. The church is a parish church as well as a national sanctuary.

For those who want to spend an unforgettable day outdoors, Nauthólsvík Thermal Beach is the place to be.

While in town, you can also take cruises and hikes in the capital.

Those who want to explore more can also move outside the area and visit Krýsuvík, where you can discover steaming volcanic vents and boiling hot springs.

The city will also offer several festival programs during the spring and summer, so be sure to check events and dates.

Iceland has already lifted all of its coronavirus restrictions. Passengers can enter the country without having to go through any entry procedures.

There are many beautiful cities around the world. However, Dubrovnik is one of the finest of those regions. With its warm southern climate, clear sea, many bays and bays, and the historic Old Town district, Dubrovnik is a must-visit.

The old city walls of Dubrovnik are the most popular among travelers, especially for fans of Game of Thrones as part of the city featured in the series. The walls were built in the 10th century, and then modified again. At that time, walls were built to defend the city from invaders.

Stradun, which is also known as Placa, is also one of the most picturesque, where pedestrians can walk and enjoy all kinds of views around them. In Stradun there are many cafes and restaurants where tourists can taste delicious food and drinks. The area also has many shops.

Another fun thing to do while in Dubrovnik is to take a boat tour around the old town or, better yet, take a ferry to Lokrum Island.

Dubrovnik has plenty of other things not to be missed. However, the aforementioned are among the most famous among tourists.

Known for its delicious food, classic architecture, museums, etc., Rome is one of the most famous European cities that records large numbers of visitors every year.

The capital of Italy is one of the oldest cities in the world, which explains why the city contains some of the most exceptional pieces of architecture. The Colosseum, the Trevi Fountain, and the Pantheon are just some of the places to visit.

The Colosseum is one of the most famous monuments and architectural works. Visiting it can feel like you are taking a trip into the past.

The Trevi Fountain is another popular attraction as well. Large crowds can be found around the fountain all day long. If you go there don’t forget to throw a coin on the fountain!

Apart from visiting the above-mentioned places and many famous places, be sure to sample Italian cuisine as well. Having a slice of pizza on the go or sitting down to a fancy dinner is always a good idea.

>> Traveling to Italy this Spring: Explanation of vaccination, testing and other entry rules

Vienna is one of the European cities that has managed to preserve its fascinating history. With its exceptional musical heritage, art collections, and palaces, Vienna represents one of the richest cultural regions in the country.

The large number of museums in it, including those dedicated to music, distinguishes Vienna from other cities and countries.

The Hofburg is one of Vienna’s most important palaces as it is the official residence of every Austrian president. It includes different buildings, each reflecting different periods.

Another place worth visiting while in Vienna, especially during spring, is Schönbrunn Palace, which was established in the 18th century. This palace attracts large numbers of tourists every year and features a huge number of rooms and apartments, some of which were used by Empress Maria Theresa.

On the other hand, the lower part of the Belvedere was completed in 1716 and marked the boundary between the imperial city of Vienna and the Baroque building complex.

Others, such as St. Stephen’s Cathedral, the Kunsthistorisches Museum, and the Vienna State Opera, which has hosted some of the world’s most famous composers, are just some of the places to visit as well.

The German capital, Berlin, remains one of the most popular destinations among travelers. Spring and summer are the perfect time to explore the city.

Although there are many things to do in Berlin, the Brandenburg Gate, now a symbol of loneliness, is one of the most visited monuments by travelers.

Berlin is also famous for its memorial wall, which was erected in 1961. The wall was demolished in 1989, leaving only small areas covered in graffiti now.

The German Historical Museum is also an ideal place to visit for those who want to learn more about the country’s history. This attraction consists of various historical related exhibits and events.

The Holocaust Monument is another place that attracts many tourists and is a must-visit for those who wish to learn more about the past of the Jews in Europe.

Other attractions, such as the 368-meter-high Berlin TV Tower, the German Museum of Technology, and the Jewish Museum in Berlin, should also be visited.

Famous for its beautiful flower fields and flower bulbs that are exported to all over the world, Les is one of the must-visit cities during spring.

Located just 30 minutes from the capital of the Netherlands and Schiphol Airport, Lisse is the perfect place for a stroll or a bike ride.

Every spring, thousands of flowers and tulips bloom at the same time for two months. Visitors can see breathtaking views and take unique photos when visiting the various flower fields. While you are in this area, you can also visit Keukenhof Castle, a house dating back to the Dutch Golden Age. The house is open to visitors all year round.

The towns of Noordwijk, Zandvoort and Bloemendaal are located near Lisse and can also be explored.

Known for its nightlife, good weather all year round, colorful buildings, fado music and food, the capital of Portugal is the perfect place to visit during spring and summer.

It doesn’t matter if you are a day or night person because Lisbon offers all kinds of activities for everyone.

For those who love nightlife, the clubs in Lisbon remain open until the early morning hours. On the other hand, early birds can choose between visiting different attractions throughout the day.

One of Lisbon’s most famous landmarks is the Belém Tower, attracting thousands of visitors each year. The tower was built in the 16th century and is a representation of Manuel architecture.

The other thing that Lisbon is famous for is the tram. Trams can be found on every street in the city center. The tram most popular with travelers is Tram 28 as it passes through some of the most popular neighborhoods.

The beaches near Lisbon are also a must-visit. Only 20 minutes from the capital, the beaches are the perfect place to spend a hot summer day.

Aside from the above, the food in Lisbon is also great. Seafood and fish dishes are very affordable and can be found everywhere. The tart custard pastry, known as Pastéis de Belém, is also one of the desserts everyone should try while in Lisbon.

Athens is the perfect city to visit for all those who wish to learn more about the past and spiritual foundation. Being the home of the oldest cities in the world, Athens is a historical site.

One of the most famous sites to visit while in Athens is the Acropolis. The Acropolis and its monuments are universal symbols of civilization and classical spirit. They constitute the largest architectural and artistic complex that Greek antiquity inherited from the world.

The Ancient Agora is another important site to visit in order to better understand the daily life of the ancient Athenians.

The capital of the Czech Republic, which also bears the nickname “City of a Hundred Towers”, is one of the best European cities to visit in the coming months. Prague is known for its colorful Baroque buildings, Old Town Square, Gothic churches, and the medieval astronomical clock dating back to the 15th century.

The Charles Bridge is also one of Prague’s most famous and well-known symbols. The bridge spans the Vltava River and is best visited in the early morning hours.

Prague Castle is another popular attraction. The castle dates back to the 9th century and consists of many other monuments, including museums, cathedrals, and others.

While there are plenty of other things and places to do and visit in Prague, don’t forget to sample the famous food and beer.

Before you decide to plan a trip to one of the above cities or any other region, don’t forget to check the current COVID-19 entry rules that each country applies.